The club was formed in 1962 in the heydays of slot car racing. The first clubrooms were an old barn in the suburb of Swanson in Auckland. Membership grew to over 100, racing was held on 5 nights of the week and the committee decided that the wise thing to do to secure the future of the club was to build their own clubrooms.

A piece of land was located beside the railway tracks in Sunnyvale, Henderson, and a lease was obtained from NZ Rail and the present clubrooms were built. Fortunately the club had builders, plumbers, electricians racing and these people all donated their time and so the cost was kept to a minimum.

In 1964 the club became an Incorporated Society, the first constitution was borrowed from a Squash Club and about the only change to it was to change the name 'squash' to 'slot car', it served well until rewritten 10 years later.

The first track in the new premises was 27.5 meters in length with 4 lanes with 76 mm between centers, the cars (1/32nd.scale) were 64 mm wide and as speeds increased the incidence of cars touching and de-slotting on the corners became more common and so a new track was constructed in 1968. The length was increased slightly to 30.5 meters with 89 mm between centers.

Cars improved both in speed and handling, seniors raced on Monday and Wednesday nights, intermediates (10 to 15 years) on Friday night and juniors (up to 10 years) on Saturday afternoon.

Early in the seventies the track had an extension placed in the start finish straight which increased the track length to 32.5 meters. This track was replaced 5 years later with a track of completely different design and with 100 mm between lane centers to allow 24th scale cars to compete, it was a super fast track and cars had improved out of sight, but unfortunately a couple of tricky parts could catch out the best of drivers resulting in damage to cars and spectators and so was replaced with our present track in the mid 1980's.

A 1/24th  scale quarter mile drag strip runs the length of the clubrooms and is raced on on Monday nights with special events being held on Sundays .The Ford Mondeo No 41 at the top of the page is the car that our Patron from 1993. Paul Radisich won the World Cup Touring Car Championship in 1993 & 1994. 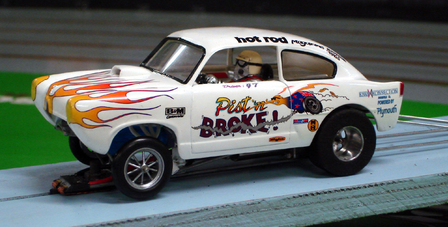